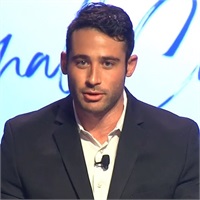 Evan is a registered financial advisor with Associated Investor Services with a focus on young entrepreneurs, athletes, high-net worth individuals and expanding companies.

Evan joined Associated in June 2017 after nearly a decade of working within the sports and entertainment industry. His journey and transition was featured by Wealth Management Magazine.

Prior to teaming with Associated, Evan worked at the global sports marketing agency, rEvolution, in Chicago. Representing brands, such as financial services firm Northwestern Mutual, the agency developed, negotiated and activated sponsorship, media and endorsement deals with leagues, teams and athletes. In addition, Evan served in roles with the NFL, MLB, NCAA and Arena Football League.

While working with athletes and young professionals, Evan saw a tremendous need when it came to financial guidance and planning. Fortunate enough to grow up with an established financial advisor, Evan opted to expand upon his career to help those around him preserve, maintain and build upon what they’ve worked so hard to achieve.

Since joining the firm, Evan attained his Series 7 and Series 66 licenses. In addition, he completed the Associate Advisor Coaching Program and the Envesnet Institute on Campus Training Program. He is currently enrolled in the Envestnet Essential Advisor Certification Program.

A tumultuous year has drawn to a close. 2020 provided an unexpected journey full of doubt and immeasurable loss. Yet, despite the uncertainty, the entire Associated family worked together to keep our doors open while continuing to...

A Brave New World: 2021 and the Impact of NIL on College Athletics

Times are changing. What once was a taboo subject across college campuses, the discussion around college athletes being able to profit from their Name, Image, and Likeness (NIL) is now front and center. As the federal government,...