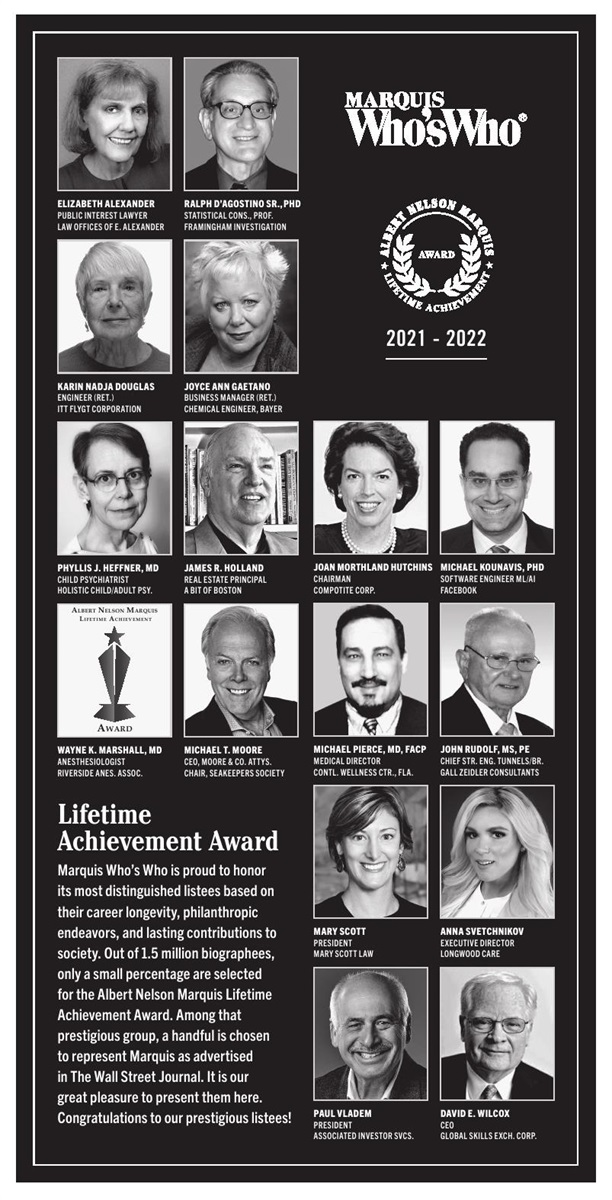 Associated President Paul Vladem received some notable recognition in the Wall Street Journal last month. After being presented with the Albert Nelson Marquis Lifetime Achievement Award, WSJ showcased the image above to it's readers on Wednesday, August 25, 2021.

The accolade speaks to Paul's dedication and positive impact he continues to make on his clients lives in his 32 years at Associated.

You can read the full press release on Paul's Achievement below:

Marquis Who’s Who, the world’s premier publisher of biographical profiles, is proud to present Paul Vladem with the Albert Nelson Marquis Lifetime Achievement Award. An accomplished listee, Mr. Vladem celebrates more than four decades of experience within the financial services industry, and has been noted for achievements, leadership qualities, and incredible successes in his field. Individuals profiled by Marquis Who’s Who are selected on the basis of several factors such as position, noteworthy accomplishments, visibility, and prominence in a field.

Mr. Vladem is the founder and president of Associated Investor Services, Inc. (“Associated”) and has led the firm’s wealth management division since 1989. In addition to managing investments, he regularly uses his expertise to guide his clients over the financial hurdles presented by major life events. Before focusing on wealth management, Mr. Vladem was a Certified Public Accountant spending eleven years at major accounting firms.

Born in Chicago, Mr. Vladem earned a Bachelor of Science in Business Administration, with honors and high distinctions, from the University of Illinois at Chicago in 1974. Although he originally entered the finance industry as a Certified Public Accountant, Mr. Vladem pivoted towards wealth management by going into business with an accounting client in the investment space. Inspired by Ron Abraham, his mentor and Associated’s founder, Mr. Vladem eventually accepted a position with the firm where the two worked together until Mr. Abraham’s retirement to dramatically scale Associated’s wealth management division. Now, Associated oversees assets under management in excess of $1 billion.

Mr. Vladem has been the recipient of numerous awards and distinctions throughout his career. In 1994, he was recognized among the Top Ten Brokers of the Year by Registered Representative Magazine*. He was also honored as one of the 2000 Outstanding People of the Twentieth Century by the International Biographical Centre in Cambridge, England. Since 2011, Mr. Vladem has been consistently selected to attend Barron’s Top Independent Advisors Summit.

However, among his many accolades, the one that holds the greatest meaning for Mr. Vladem was the 2018 Envestnet Institute on Campus Vision and Essential Advisor Award. In addition to the honor of being named as the award’s inaugural recipient, Mr. Vladem is a proud and ardent supporter of Envestnet’s mission of helping female and minority students receive training that prepares them for the current workforce.

In his free time, Mr. Vladem enjoys playing tennis as well as attending sporting events. Moreover, he gives back to the community in different ways including his many contributions to the Jewish Foundation of Broward County’s Investment Committee, of which he previously served as chairman and executive board member. As former president of the Coral Springs Museum of Art, Mr. Vladem has been inducted into the museum’s honorary board of directors.

* The Outstanding Broker Award from Registered Rep Magazine includes financial professionals that represent top levels of performance in their firms, and who also demonstrate professional leadership and a commitment to charitable and community work. To be eligible for the award, the following criteria had to be met: minimum of three years in the industry as a producing retail registered representative; minimum of one year with his or her present firm; good compliance standing; not a previous Outstanding Broker Award recipient; and ranked in the top 25 percent of his or her firm's retail producers.