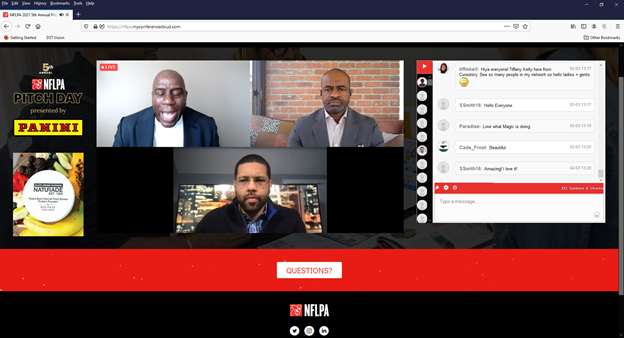 NFLPA Super Bowl Chat with Magic Johnson: "Save Your Money"

Super Bowl Week serves as more than just a battle against the two best teams in the NFL – it’s the annual celebration of football for players, coaches, partners, fans, and the sports business community.

The Super Bowl host city typically becomes a massive hub to bring everyone together, with elaborate parties and business networking events. It’s a time for NFL players to join forces to discuss opportunities – both on the field and off of it.

Although this year’s Super Bowl may be different, virtual events around the Big Game are ongoing.

The NFLPA is hosting a week-long summit for its players and business professionals. Along with Associated’s Luana Mobley Corral, an NFLPA Registered Player Financial Advisor, the team will be present at these Super Bowl events leading up to Sunday’s big game, including the fifth annual, business-centric NFLPA Pitch Day.

During Wednesday’s Pitch Day panel, Magic Johnson had some wise words for NFL players looking to leverage business and investment opportunities. The NBA Hall of Famer was joined by NFLPA Executive Director DeMaurice Smith and well-known sports commentator Michael Smith in a Fire Side Chat to kick off the event.

Johnson urged players to take advantage of their platform, and, although they may be the best at their craft as an athlete, they have to prove themselves again in the world of business.

Johnson had two dreams when he was a child, play in the NBA and become an entrepreneur. He accomplished both. “The most important thing,” Johnson said about his success during and after his playing career, “I saved my money. I made sure that I was prepared financially so when opportunities came my way, I was ready to acquire a business.”

Johnson advised NFL players to make sure they were working with the right people and had the right team in place.

“It’s not about your buddies,” he said during the discussion. “I was blessed, I had the right team in place.”

“Don’t get mad when someone tells you the truth. [People] are all going to love you [on the playing field], but when it [comes] to the business arena, that’s out the door. I don’t care about that. Can you drive ROI, can you be on time? When you make this commitment, can you follow through?”

Johnson also stressed the importance of preparation to players.

“You’re competitive, you want to win but you have to be prepared,” Johnson said. “If you’re prepared going into a meeting, you will do very well in my opinion. It’s the same preparation [ahead of a game] as in business.”

“It’s almost like going back to school. You just have to get the information to help you get started,” Johnson said.

Welcome to Associated's "Meet the Advisors" blog series where our financial advisors will provide insightful commentary on their career, client approach, current market news, and other engaging topics. Starting off are Patrick Farrell...